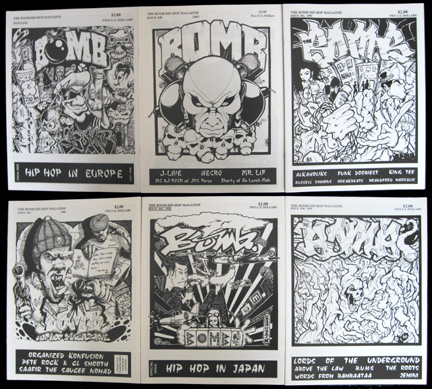 If one was to trace the roots of Bay Area hip-hop the common thread would be the legendary Bomb magazine created by Bay Area dj David Paul in 1991. The black & white 'zine focuses on all four elements (djing, mcing, graffiti, breakin') of the hip-hop culture on the local, national and international level. The caliber of writers that wrote for the Bomb during it's existence (1991-1996) was extraordinary, writers like Funken-Klein (R.I.P.), Billy Jam, Spence Dookey, Cheo Coker, Jazzbo, Faisal Ahmed, Dave Tompkins, DJ Shadow, Kutmasta Kurt and many others who have all wrote or are currently writing for major publications or have moved on to other fields of the music industry. At that time there were very few other hip-hop publications and the large ones didn't really cover independent or new groups so the publication was well received by hip-hop fans throughout the world.

If you would ike to purchase back issues of The Bomb Hip-Hop Magazine you can get them at the vintage magazine store Goteblüd @ 766 Valencia between 18/19th in San Francisco. They are only open on the weekends - Sat/Sun 12-5pm. You can also mail order magazines from us directly. All issues listed below in bold type we have in stock. $5 each in the US, $7 anywhere else in the world. Price includes shipping and handling. Just paypal the total amount to bombhiphop@gmail.com and we'll ship you the issues that you want.


note - to celebrate the 20 year anniversary of the company we will publish the 50th issue of The Bomb Hip-Hop Magazine in October, 2011.