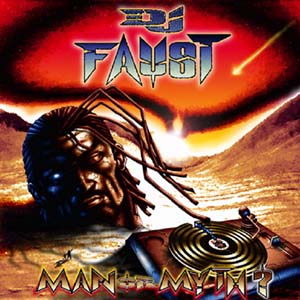 DJ Faust presents a total of 27 monsterous scratching tracks on his debut album Man or Myth? Faust, able to adapt turntables as a musical instrument, creates a dimension of sound and imagination that teleports the listener into a surreal world of music, the world of the turntablist. Man or Myth was constructed without any samplers, effects or sequencers. "Echoes were laid like a pause tape - turn the volume down, re-record, turn it down more, re-record etc." explains Faust. The result is a string of musical compositions that bombard the listener with a fury of instruments, sound effects and basslines created by two turntables and a 8-track recorder-all orchestrated and manipulated by the hands of a hip-hop magician. 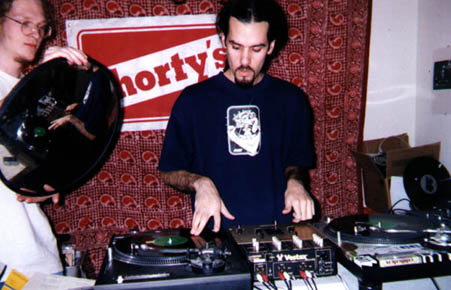 Also featured on the album are guest appearances by other members from the Third World Citizens collective; female deejay Shortee - drummer for 15 years and a black belt, Miami's DJ Craze - Zulu DJ Champ 96 & 97, and rap group Goodie Mob's deejay Shotgun. All three contribute selections to the album that will assist in this projects' success in 98 and beyond. Along with the arrival of the new millenium comes the advancement of music and how the world creates it. A world reigned by DJ Faust... Man or Myth? 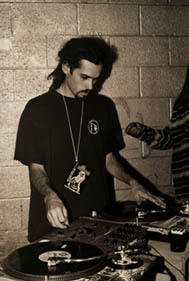 "Eventually Faust is juggling half a dozen snippets at once and then lets it all collapse together in a moment of musical chaos that destroys me with its atomic energy --- rendering me speechless." - Bay Guardian

"Cut Chemist hears what sounds-like-wah and immediately says, "That's dope that he did it that fast without the pedal." Wahaat!" - URB Magazine

"This is ridiculous DJ skills and insane obsession all rolled into one little package. 10" - Muzik Magazine

"No human being is capable of doing what he has done on Man Or Myth. Faust is my boon coon for DJ album of the year. Listen to DJ Faust's Man Or Myth and you will never look at a DJ the same again." - Slap Magazine

"Join Faust's complete itch therapy program. This guy must be up to his knees in vinyl shards." - Kid Koala (Ninja Tune artist)

"From Atlanta's tactile, tone-arn terrorist comes one of the most arresting and surreal turntablist records of the year, Man Or Myth?, which takes electronic music to the breaking point and beyond." - CMJ

"This is one of those DJ albums that b-boys, b-girls and lovers of the art of turntablism everywhere will appreciate." - HITS