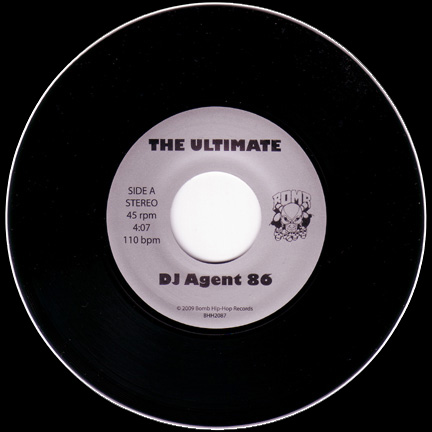 This 7" record by Australia's DJ Agent 86 features “The Ultimate” on the a side and “Big Shot” on the b side. This is a limited edition pressing. 7 inch record at 45rpm, with large hole and black & silver face labels.

We will once again make the record availble to buy again soon.


Hi all! Thanks for takin' the time to visit. Let me cut to the chase: I've played countless gigs from '89 til now playing a ton of styles ranging from House & Techno to Hip-Hop, Electro (Old-School, New-School & Clash), Funk, Beats & RnB to Rock, Pop and beyond and I've played virtually every major club & party in Adelaide & Melbourne plus a host of gigs in Sydney, Brisbane, Auckland, Berlin & London and numerous other places. I rock parties & I love doin it.


This is what a few people have said about me :

"Agent 86 is one of the finest DJs this country has to offer. The fact he can mix a variety of genres – in tune – as well as scratch up a storm simply blows me away every time I see him. It’s beyond my comprehension why he hasn’t been voted 1 in the inthemix50 DJ poll yet." Funky J, November 18th, 2008, Inthemix.com

..and I've had people like Pharell, Q-Bert, Yodafrog, 2ManyDJ's, Tim Paris, Thomas Schumacher, Scottie B and many others that I personally respect, give it up when they've seen me play...

A very rough outline of my career looks like this :

Having started in 1989 at The Tunnel (in Adelaide), I established the infamous "Adrenalin" & "Hell" nights and went on to become resident DJ alongside Angu$, PhD, Scott Thompson & HMC at Metro in 1991/1992.

Between the years 1992 & 1998, I was working at Central Station Records, including a stint as Store Manager (!!) whilst simultaneously holding down various residencies including a notable one with HMC at the infamous Crown & Sceptre nights around '94/'95.

In this time, also, I was hosting a weekly radio show on Dance FM and entered the '97 DMC competition (2nd Runner Up) and the ITF Battle (Semi-finalist). I hooked up with a fellow DJ & budding producer, Magnoplas (aka DJ Breeze) to start The Paradroids, leading to a number of releases (see discography below) and embarking on some memorable 4 deck + fx "live" shows around Adelaide.

Around the turn of the century I packed up & headed to Berlin & London where I spun some records, met some cool people & worked in a vinyl distribution company named "Contact UK".

At the end of 2000 I moved to Melbourne, Australia & begun a new journey in my DJ career with humble beginnings at QBH in the Sky Lounge alongside Jorge Hernandez & Damion De Silva (thanks to my good friend J-Wess for hookin' this up), Revolver alongside Sunshine (thanks, as always, to my man Ransom for believing in me & hooking this up) as well as Q-Bar (thanks to Mods, Angelo & others for the good word...). Around this time, also, I began working at Sanity's Dance Arena which, for all it's faults, gave me the opportunity to meet people such as Mike Callander and many others that I'm still friends with to this day. From there, I soon began playing all over town at most of the major parties, guest spots at all the hot clubs & then onto interstate/overseas gigs. I also had an enjoyable stint working at Mighty Music Machine in Chapel St., my last journey into music retail.

In 2002 I established Melbourne's first contemporary, weekly electro/electro-clash club ROXY and from 2003 onward, spent more & more time back in the studio (please see Discography below).
Right now I'm doin' more of the ol' same-ol' same ol': lots of DJ'ing, a few mix cd's here & there & a bit of production work. This represents a little of what I've been doing throughout my career, though it's, really, just the tip-of-the-iceberg; there's so much more I haven't mentioned.

Obviously, I'm a DJ first & foremost - and that's where my passion lies, but I've been involved in a number of areas of the music business, from playing records to making records to selling records. If you haven't already gathered: I'm committed to this!

And on a final note, to each & every single person who has been on the dancefloor enjoying the tunes and to all of my peers who have helped me in various ways: Respect.